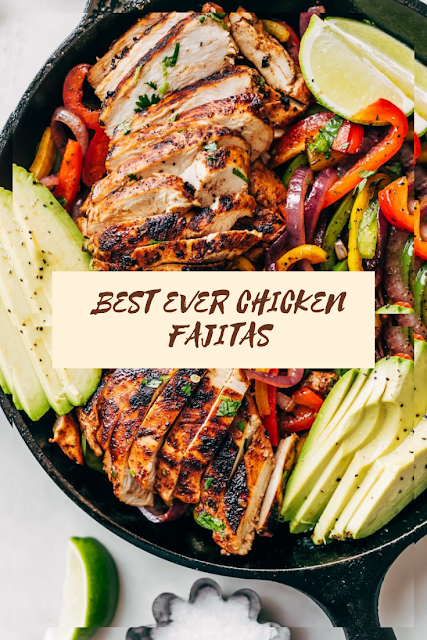 I can’t believe it took been two years since I last shared a fajita recipe with you.
I first shared my steak fajitas recipe over two years ago, and now I’m happy to say I’m bringing a version to you today that’s been tweaked a bit so that the flavors work better with chicken.
Chicken fajitas were my favorite thing my mom made growing up. I take that back. They were one of my favorites. That’s more accurate. Mainly because it was chicken, peppers, and onions stuffed into warm tortillas and the topping possibilities were endless! My mom made them the way most people do, with a simple seasoning packet and for years, I made homemade chicken fajitas the same way, but that’s certainly not the case anymore!
When you make your own homemade chicken fajitas marinade, the chicken is a billion times more flavorful, and you get to control the heat level too. If you’ve made and loved my steak fajitas (the way sooo many people have,) you’re going to love today’s chicken version!
My recipe for homemade chicken fajitas starts with the chicken marinade. Unlike the seasonings packets which you just pretty much dump onto chicken breasts, and toss it into a pan, we’ll be allowing the marinade to really soak into the chicken so that it’s flavors everything perfectly. Trust me! These are some of the best chicken fajitas you’ll ever have and I wouldn’t say that if I didn’t mean it.
This recipe makes a ton of chicken fajitas! Enough to feed 6-8 people and you can certainly cut the recipe ingredients in half if you don’t want to have so much around. I always like to marinade a ton of chicken for my fajitas because we turn the leftovers into Chipotle-style burrito bowls for lunch the next day. This also works well for meal prepping because unlike a lot of meal prep recipes, chicken fajitas actually taste better as they sit. You can serve the fajitas over a salad or on top of quinoa if you decide to meal prep them for the week.
The ingredients for my chicken fajitas are very similar to the ones I use for the steak version. I’ve just added a couple of additional components that pair well with chicken.

WHAT YOU’LL NEED FOR THE CHICKEN FAJITAS MARINADE:

You might be wondering why I use pineapple juice to flavor the fajitas. Pineapple juice, the good stuff that has no added sugars is what you’re looking for here. Store-bought fajitas seasonings usually contain enzymes that help tenderize and break down the chicken, so you’re left with tender chicken in every bite. Pineapple juice goes the same thing here, and it’s a natural ingredient. I’m not too comfortable with some of the stuff that’s labeled as ‘meat or poultry tenderizer.’ Not sure what’s in it because they almost never label those kinds of things.
If you aren’t a fan of pineapple and are wondering if you can taste it in the chicken once it’s cooked, the answer is no. Not at all. It just does it’s thing and doesn’t even leave a trace. 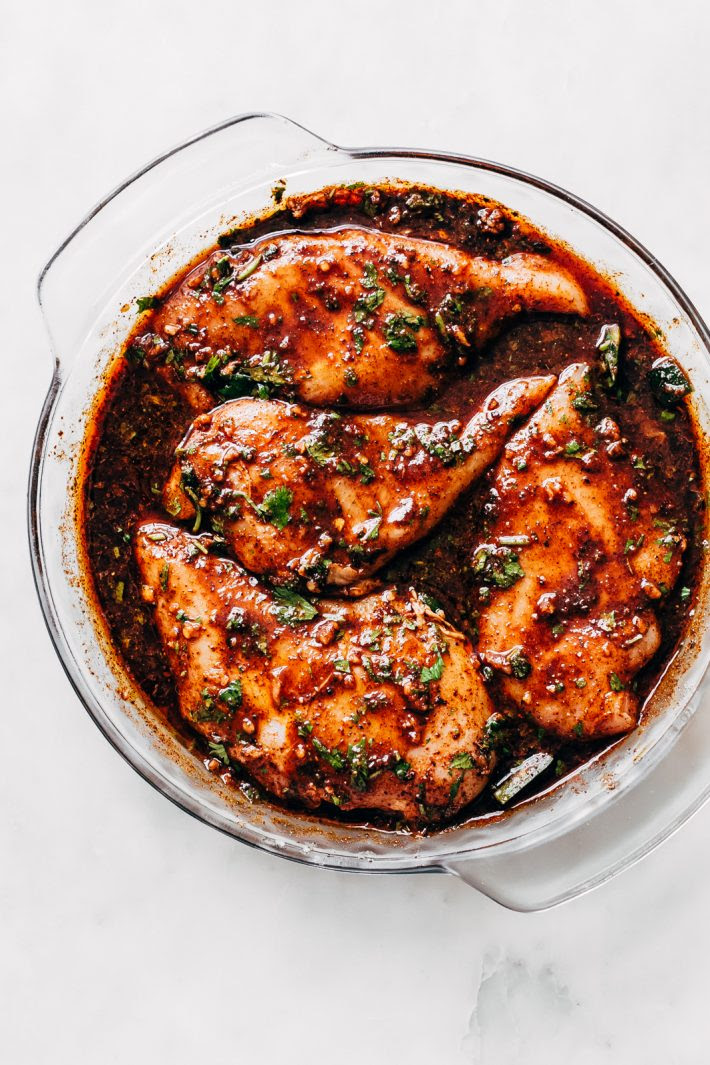 Let’s talk about the chicken here for a second. I used chicken breasts, but I could see this recipe working well with boneless, skinless chicken thighs too. You guys know that’s not my thing, but for someone who prefers dark meat chicken, this would be the ideal thing to use.
We’re going with pretty standard stuff here – sliced peppers and sliced onions. Use an array of pepper colors here; it only makes the meal look that much more appetizing! I like to use red onions with chicken fajitas and white or yellow onions when I’m making beef fajitas, however, whatever kind of onion you have will work here. If you’re familiar with my steak fajitas recipe, you know I like to use sliced poblano peppers along with bell peppers. I opted to go the full bell pepper route here, however, you could also substitute green bell peppers for a poblano if you’d like.

HOW TO COOK CHICKEN FAJITAS:

HOW TO SERVE CHICKEN FAJITAS:

For serving you’ll want to grab flour/corn tortillas, guacamole, guacamole salsa, salsa, sour cream, and shredded cheese.
When I make burrito bowls, I start with homemade garlic lime rice, top it with the cooked fajitas and then comes the fire roasted corn, guacamole, double the salsa, a dollop of sour cream and a generous sprinkle of shredded cheese. Fully loaded is how I like my chicken fajita bowls.
And there you have it! Don’t think twice here, marinate that chicken and make this. Hope you love my homemade chicken fajitas recipe as much as we do! 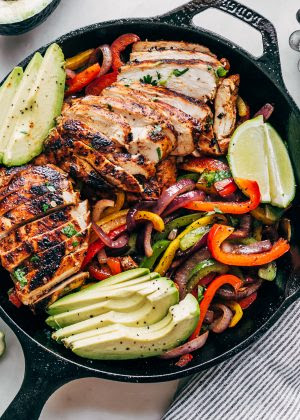 PRINT RECIPE
5
5 / 5 (3 Reviews)
Did you make this recipe?
END_OF_DOCUMENT_TOKEN_TO_BE_REPLACED