- August 13, 2019
These homemade 1-hour cinnamon rolls will knock your socks off! My homemade cinnamon rolls taste just like Cinnabon but are kinda, sorta even better. Plus, they take no time to make at all!

The only way I know how to describe 1-hour cinnamon rolls. But I can find other words too like ‘dangerous’ and ‘deadly.’ For someone that loves making a big deal out of Saturday or Sunday morning breakfast, without a whole lot of fuss, these are perfect. Ready in no time and they taste even better than the stuff you get at the mall.
Perfectly swirled with cinnamon sugar and rolled up in hot, buttery dough, and if that wasn’t enough, we top it with a tangy and sweet cream cheese icing that I contemplated eating straight from the bowl with a spoon because, holy cow, that. Is. Good.
Cinnamon rolls are my jam. I mean, I’ve made caramel apple rolls in an hour, and now I’m finally getting around to sharing my 1-hour cinnamon rolls recipe with you. It’s one I sat on for quite some time because I just couldn’t get that cream cheese icing right. Until now that is.
It’s the last couple months of the year which means three things, I’ve dusted off all my baking gear, bought all the butter I could find at Costco, and pre-booked all my Orange Theory classes because this girl is gonna need to keep it all together somehow with all that dessert around!
This is my classic, go-to 1-hour cinnamon rolls recipe that I’m sharing with you today. The equivalent of giving you my heart in the food world. The fluffiest, softest, sweet dough, loaded up with buttery cinnamon sugar swirls and finished just the way they make it at Cinnabon.
I made not one, but two whole trays of these rolls last week and had to call everyone I know to take some because if I kept them in the house both the hubby and I would undoubtedly polish off both pans. I rang him up at work one afternoon to check if I should keep a few around or give them all away and in his most serious voice he responded, ‘keep a few, I want some.’ Y’all, this guy supposedly doesn’t like any dessert that doesn’t contain chocolate, but even he couldn’t pass these up! 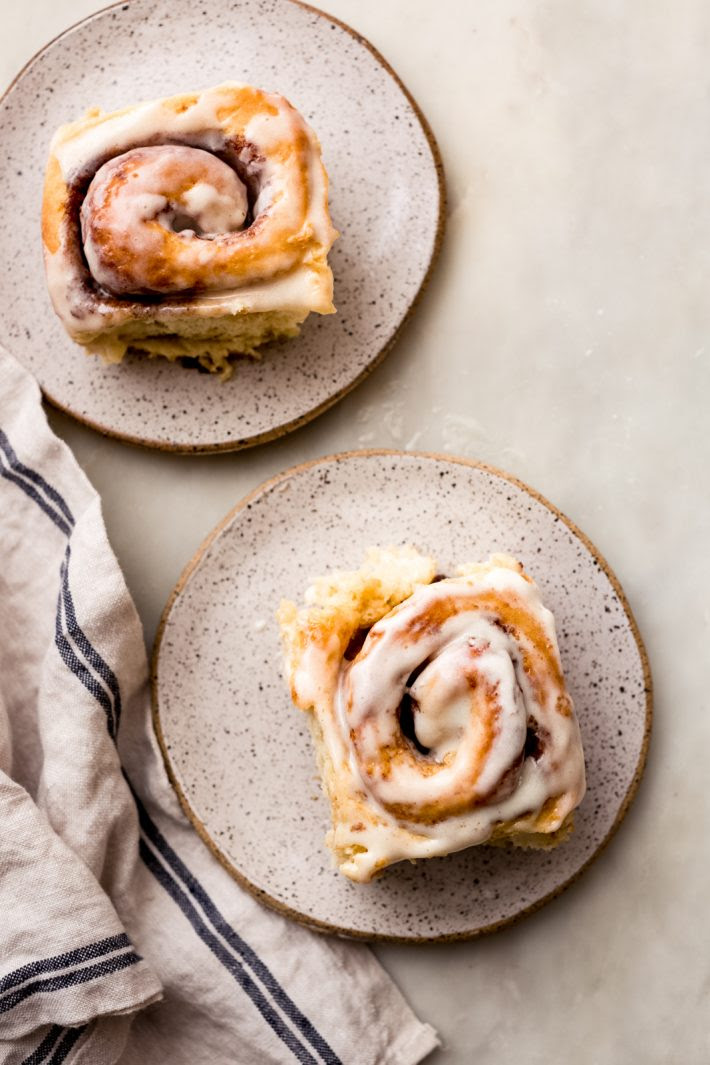 WHAT DO YOU NEED TO MAKE THE 1-HOUR CINNAMON ROLLS DOUGH?

DO YOU HAVE TO USE POWDERED MILK WHEN MAKING CINNAMON ROLLS?

No, it’s not a 100% mandatory ingredient, but it’s one that I’ll never make cinnamon rolls without. It gives these 1-hour cinnamon rolls that bakery style flavor, one that you can’t pinpoint while you’re eating but you know there’s something super special about these rolls. 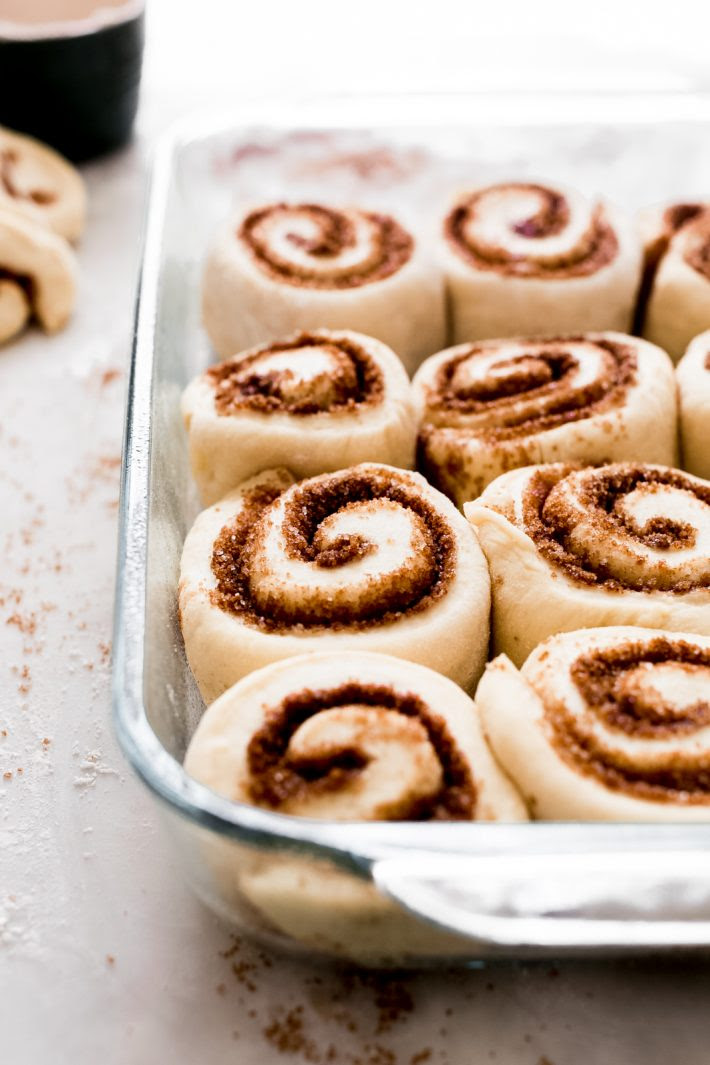 HOW DO YOU MAKE THE DOUGH FOR 1-HOUR CINNAMON ROLLS?

This is quite possibly the easiest cinnamon roll dough you’ll ever make. We’re not wasting hours upon hours letting the dough rise. This is made for weekend mornings, after all. Just toss the ingredients into your stand mixer (affiliate link) and let the ingredients mix up together and let it run for 5-7 minutes until the gluten develops and the dough is stretchy and perfect. Then cover it up and let it hang out for 10 minutes.

WHAT IF IT’S COLD WHERE I LIVE, WILL THE DOUGH RISE IN TIME?

If it’s super cold where you live or your kitchen is drafty, I have a tip for you! While your dough is mixing, run to your laundry room and heat the dryer on the highest setting for about 5 minutes. Then, turn the dryer off, cover the dough bowl with plastic wrap and place the bowl inside. Don’t turn the dryer on again, the warmth in the dryer with bring your dough right up. I do this all the time! And no, your dryer won’t smell like bread dough afterward, don’t worry!

WHAT’S IN THE CINNAMON ROLL FILLING?

You don’t have to use the nutmeg if you don’t want to, it’s only 1/8th of a teaspoon but I do find that it brings out the flavor of the cinnamon even more.

DOES THE QUALITY OF INGREDIENTS MAKE A DIFFERENCE?

Make sure to use good quality cinnamon when you make my 1-hour cinnamon rolls. During recipe testing, I used cinnamon that I bought in a large bulk size container, and I could barely taste the cinnamon at all! I made them again the second time using good quality cinnamon, and I can’t stress how big of a difference it made to the finished product! Siagon cinnamon works best here but I know it can be quite expensive and you may not want to splurge on something like that if you don’t bake too often. Use the best quality cinnamon that you can, and I promise you, these 1-hour cinnamon rolls will treat you well.

I played with the cream cheese icing tons. Like a whole lot! I used the traditional ratios of cream cheese, butter, powdered sugar, milk, and vanilla and no matter how much I played with it, I didn’t love it. It just didn’t have that tang that I wanted from the icing.
The trick? A hint of lemon juice.
Now, let me just say, if you don’t like things that have buttermilk or a tang to it, this might not be your sort of thing. And you can certainly replace the lemon juice with additional milk, but if you’re into gourmet style rolls that cut through a bit of that sweetness, and add a bit of sophistication, a hint of lemon juice in the icing is going to blow your mind in the best way!

This recipe makes 12 rolls, and I like to bake them in a 13×9 inch baking dish (affiliate link.) This gives the rolls enough space to expand so that they bake up more evenly. I always find it tricky baking rolls in a round baking dish; mine tend to come out a bit doughy and underbaked in the middle sometimes.
And that’s it! You seriously won’t believe how easy it is to make 1-hour cinnamon rolls. Get the kids together and make it a weekend project. Or drop a hint to your s/o and have them make them for you! 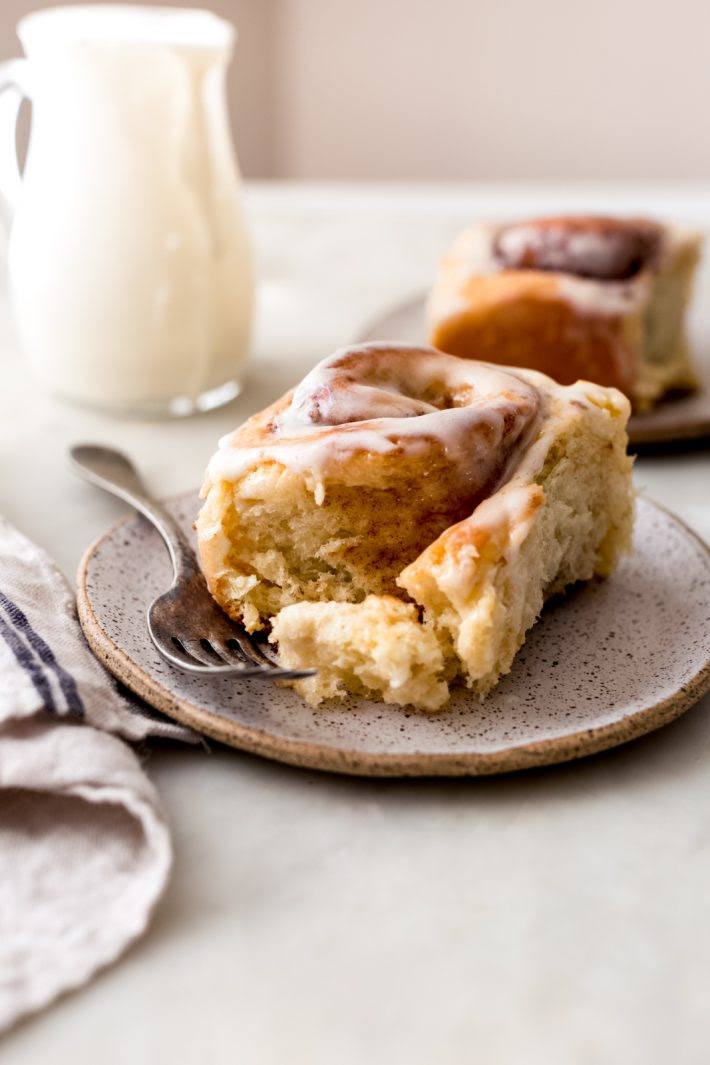 prep time:40 MINS
cook time:20 MINS
total time:1 HOUR
Homemade 1-Hour Cinnamon Rolls that’ll knock your socks off! These cinnamon rolls taste just like Cinnabon but are kinda, sorta even better. Plus they take no time to make at all! 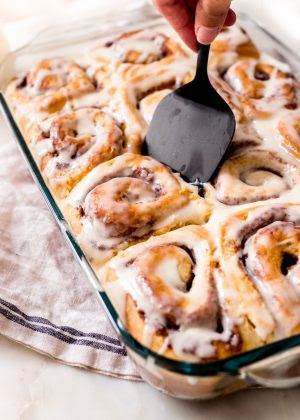 PRINT RECIPE
Did you make this recipe? END_OF_DOCUMENT_TOKEN_TO_BE_REPLACED