- August 13, 2019
An easy skillet chili recipe topped with a jalapeño cheddar cornbread crust baked right on top! It’s warm and hearty and perfect for fall or winter. No one’s going to be mad that there are fewer dishes to clean!

Chili demands to be made in the skillet topped with a sweet and spicy jalapeño cornbread crust. It’s dangerously addicting because that cornbread has a hint of sweetness that balances out the heat from the chili. Not only is it hearty, but it’s also quick to pull together. Best of all, you don’t need to make individual corn muffins. Smear your cornbread batter right on top of your chili and pop this bad boy in the oven.
Then it’s as simple as topping your bowl of chili with all your favorites, chopped scallions, a dollop of sour cream, or fresh cilantro. My personal preference at the moment? Just a big dollop of guacamole! Don’t knock it till you try it; it has that same creaminess of sour cream only much much better.
I don’t think I’ll ever serve my skillet chili without guacamole again. 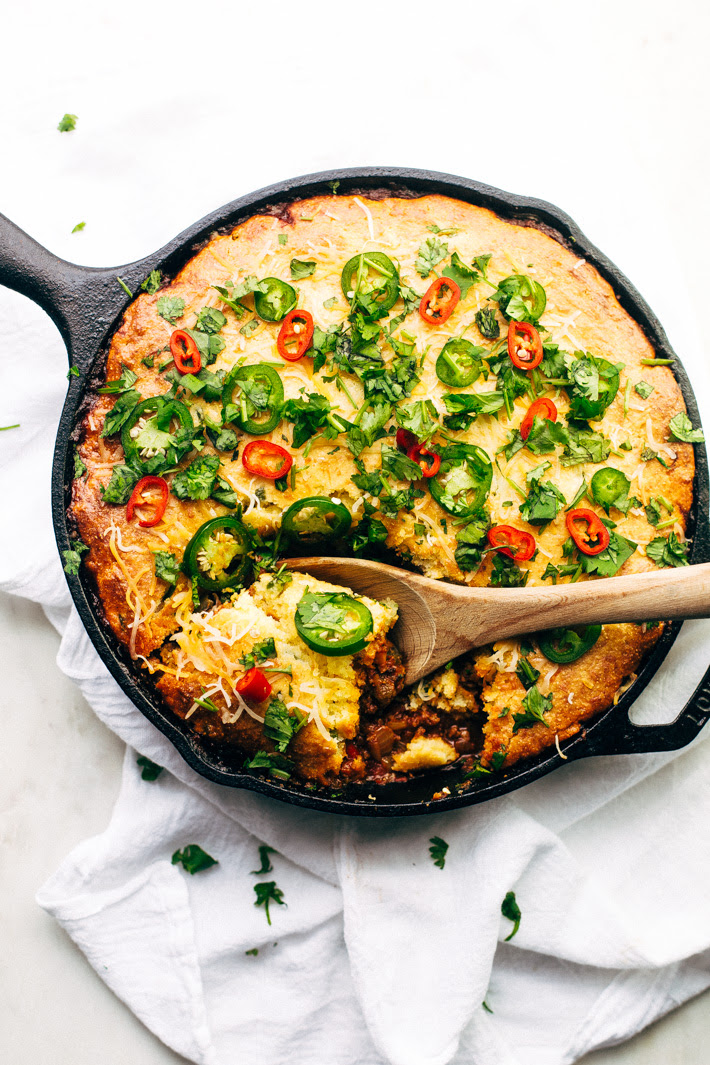 This recipe came about when one of my closest friends introduced me to something called spoon bread. Have you heard of it? I certainly hadn’t. It’s the most fantastic cornbread pudding ever. Especially if you spice it up with peppers and cheese, oh yeah. She swapped out the traditionally used corn kernels and used green beans instead and wow! It was magic. So it got me thinking; why not make skillet chili and top it with that same sort of cornbread mixture? I held to my taste buds when I swapped the corn for jalapeño peppers and cheddar cheese.
I’ve made tons of chilis, there’s the instant pot kind, the Texas-style chili, butternut squash chili, pumpkin chili, but this one is still one of my all time faves. And that may have to do with the fact that it’s a complete meal coming out of one skillet. 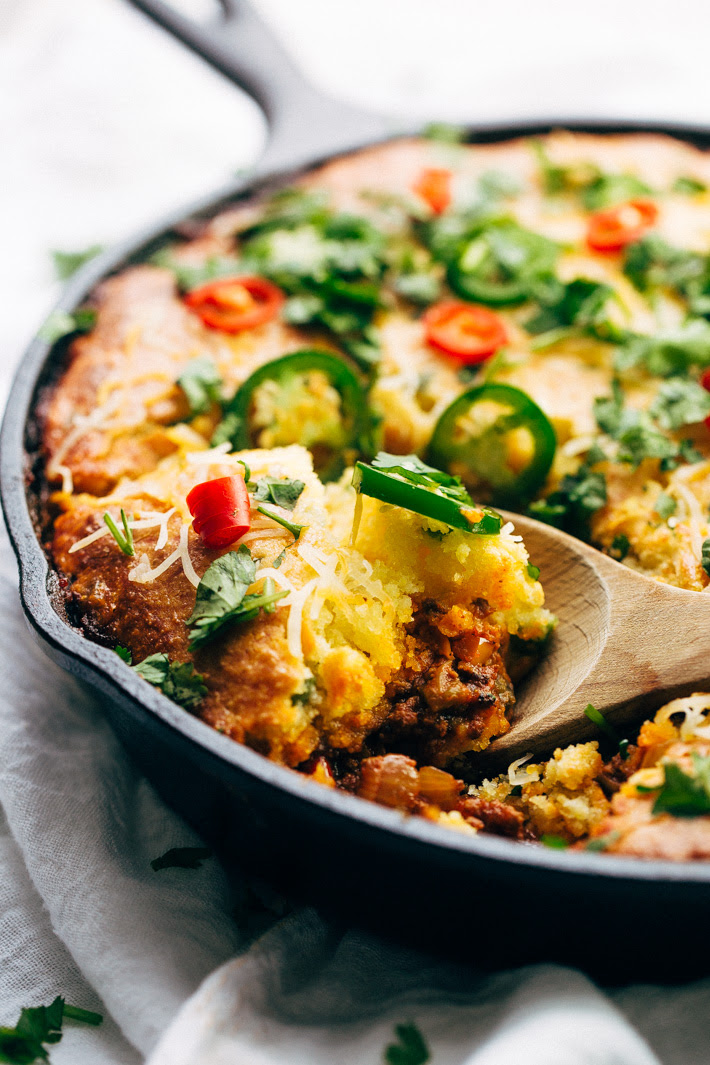 WHAT DO WE NEED FOR OUR SKILLET CHILI?

Okay so this might seem like a lot of ingredients when you scroll down, but it’s all the usual stuff.

I DON’T LIKE GROUND BEEF, CAN I USE SOMETHING IN PLACE OF THAT FOR THIS SKILLET CHILI?

Sure, you can replace the ground beef with ground turkey or chicken, both would work equally well here. I do suggest using ground chicken thighs though, and the chicken breast may not hold up to well to the longer cooking time!

DO THE JALEPEÑOS IN THE SKILLET CHILI MAKE IT SPICY?

They do, but it’s nothing that we can’t handle. However, if you usually prefer milder flavor or don’t care for spice, I suggest swapping out the two jalapeños in the chili for ½ a green bell pepper. That will help curb that spice a bit. If you’re still worried, use mild chili powder, and swap that chipotle chili powder for more paprika!

WHAT IF I WANT TO MAKE THIS VEGETARIAN, OR WHAT IF I LIKE BEANS IN MY SKILLET CHILI RECIPE?

Did you notice there aren’t any beans in this skillet chili? That’s because this is an all meat chili! But don’t worry, if you’re vegetarian or prefer beans in your chili the way I usually do, I’ve got an option for you.
This recipe as written calls for 1 pound of meat, but after the first couple times, I felt like I wanted to try and see if I could make my skillet chili with a can of beans. And so I swapped ¼ pound of the meat with one can of black beans and voila! It worked like a charm! So now, I usually make this with ¾ pounds meat and one can of black beans that have been rinsed and drained. You can still make this with 1 pound of beef, or replace all the meat with 3- 3 ½ cans of black beans, it’s entirely up to you!

WHAT DO I NEED TO MAKE THE JALAPENO CHEDDAR CORNBREAD TOPPING FOR MY SKILLET CHILI?

CAN I USE A HOMEMADE CORNBREAD MIX?

Maybe! My most educated guess is that it should work. However, every homemade mix is different. You may need to play around with the liquid a bit depending on the ratio of flour and cornmeal in your homemade cornbread mix. The cornbread batter should look the way it does when you make muffins, so if it’s way too thick, you may need a little more liquid to thin it out. For best results, I suggest using a store-bought mix; it always works like a charm!

CAN I MAKE SKILLET CHILI IN ADVANCE?

YAS! Chili is just one of those special meals that taste better as it sits! So feel free to make this up to two days in advance. You could make the chili filling on the weekend and serve this on Monday or Tuesday night. All you need to do is let the chili come to room temperature, combine everything for the cornbread crust and then pop it in the oven to bake.

CAN YOU FREEZE LEFTOVER SKILLET CHILI?

We’ve never had any leftover to test, but I think it should hold up fine in the freezer for a couple of months. You’ll want to defrost it in the refrigerator overnight and then pop it back into a casserole dish and heat it through in a 300ºF oven for roughly 20-40 minutes depending on how much you have leftover.
You guys, Anees raved about this. He loved how hearty and filling this skillet chili was. And unlike most of my food whims, he wholeheartedly agreed that skillet chili should always be served with guacamole But for the purists, a little sour cream does wonders too.
It’s serious guy food, so I’m pretty sure you’ll get a similar reaction if yours is a meat lover too! And I’ve got something for you. It’s easy to put together and pleases mostly everyone.
DONE and DONE. 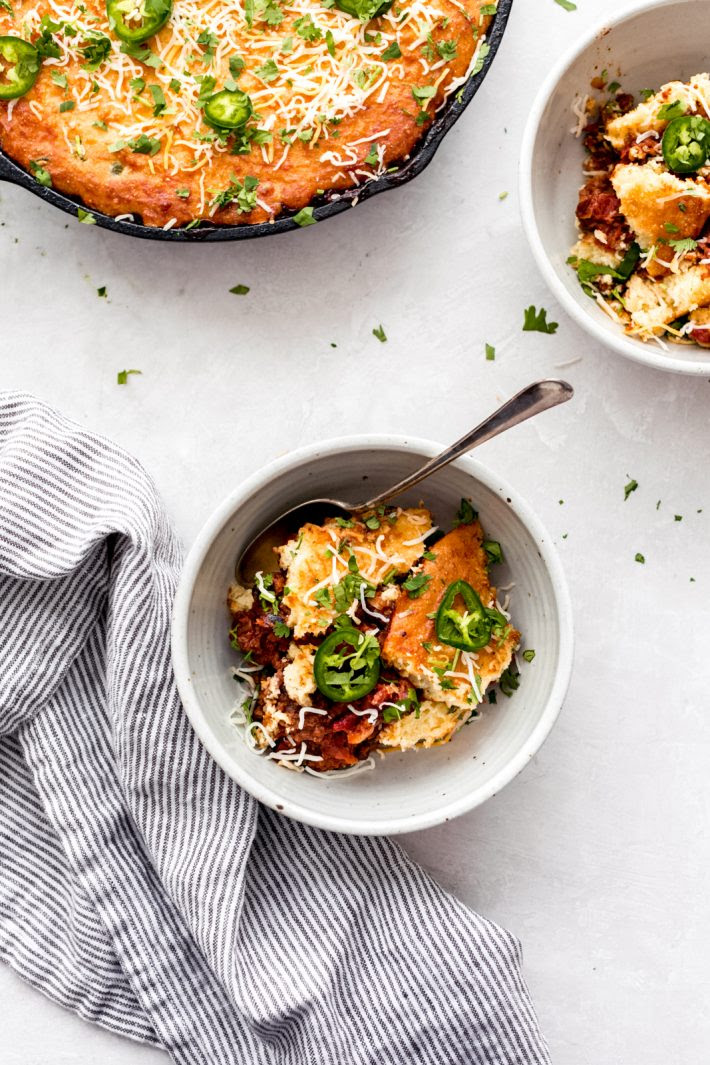 prep time:20 MINUTES
cook time:1 HOUR
total time:1 HOUR AND 20 MINS
An easy skillet chili recipe topped with a jalapeño cheddar cornbread crust baked right on top! It’s warm and hearty and perfect for fall or winter. No one’s going to be mad that there are fewer dishes to clean! 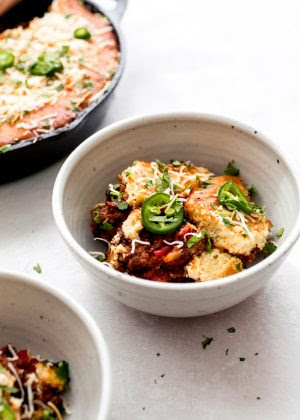 PRINT RECIPE
5
5 / 5 (6 Reviews)
Did you make this recipe? END_OF_DOCUMENT_TOKEN_TO_BE_REPLACED