- August 15, 2019
Learn how to make a supreme Detroit-style pizza with simple ingredients! The key to making Detroit-style pizza is all in the crust. Using bread flour yields a crust that’s crispy on the outside and chewy in the center. Top it with pepperoni, black olives, bell peppers and tons of mozzarella cheese! 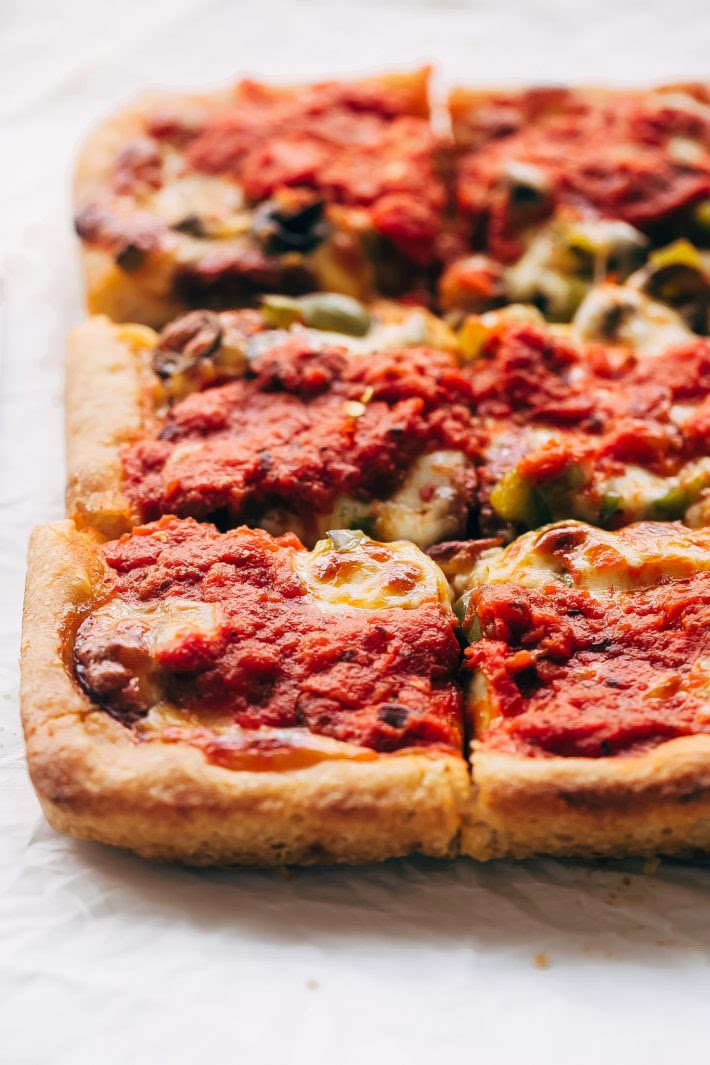 Alright, you guys. It’s another addition of homemade pizza(!!)

And this time, the recipe is so ridiculously easy. And I know, I’ve said making homemade pizza dough is easy before and it is, but it doesn’t get easier than this. And that’s because the stand mixer is going to do all the work for you – all of it. That means, there’s no kneading, or shaping when it comes to Detroit-style pizza. Make the dough, let it rest, dump it in a baking pan, spread, top, and bake.
This is a new favorite in our house.
Favorite of mine because there’s less work involved; favorite of hubbies, well, because he loves pizza in every form. So much so, that I was explicitly told that I couldn’t make this pizza when he was away. He wanted it hot and fresh the day it was made. 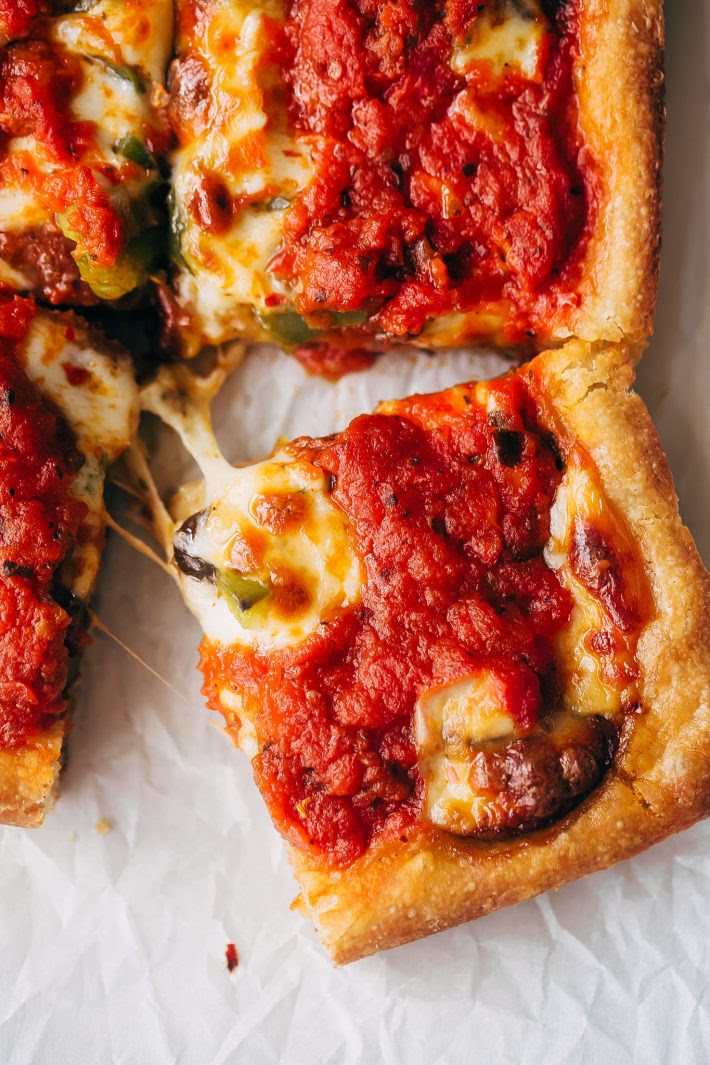 When it comes to pizza, I don’t discriminate.
However, I do tend to lean more towards Chicago-style pizza. A deep dish pie loaded with so much cheese you practically can’t breathe through all the crazy cheese pulls. And don’t even try eating it without a fork and a knife. If it’s good Chicago-style pizza, that should be impossible. Topped with a thick and hearty tomato sauce that’s bright and flavorful to boot. Lawd, I am just counting the days to my next slice.
But when I realized that Detroit-style pizza shares some of those same qualities, as in a thick and crispy, buttery crust topped with all the toppings and the cheese then a hearty ladleful of sauce ON TOP, I knew it wouldn’t take more than a bite to convince me. And you might even get me to admit that Detroit-style pizza has the best crust I’ve EVER had. And that’s a big step. I take my pizza crusts very seriously.
Here’s the thing. I’m usually not a big meat topping eater. As in my topping choices for pizza usually are the same as they are for my omelettes. A handful of onions and peppers. Sometimes it’s mushrooms and spinach. If I’m feeling extra crazy, I’ll get it with white sauce. But never more than two toppings. It’s too much. It takes away the taste of all that rich tomatoey sauce and cheese. Who doesn’t want to taste the CHEESE or their pizza?
Not anyone I know. 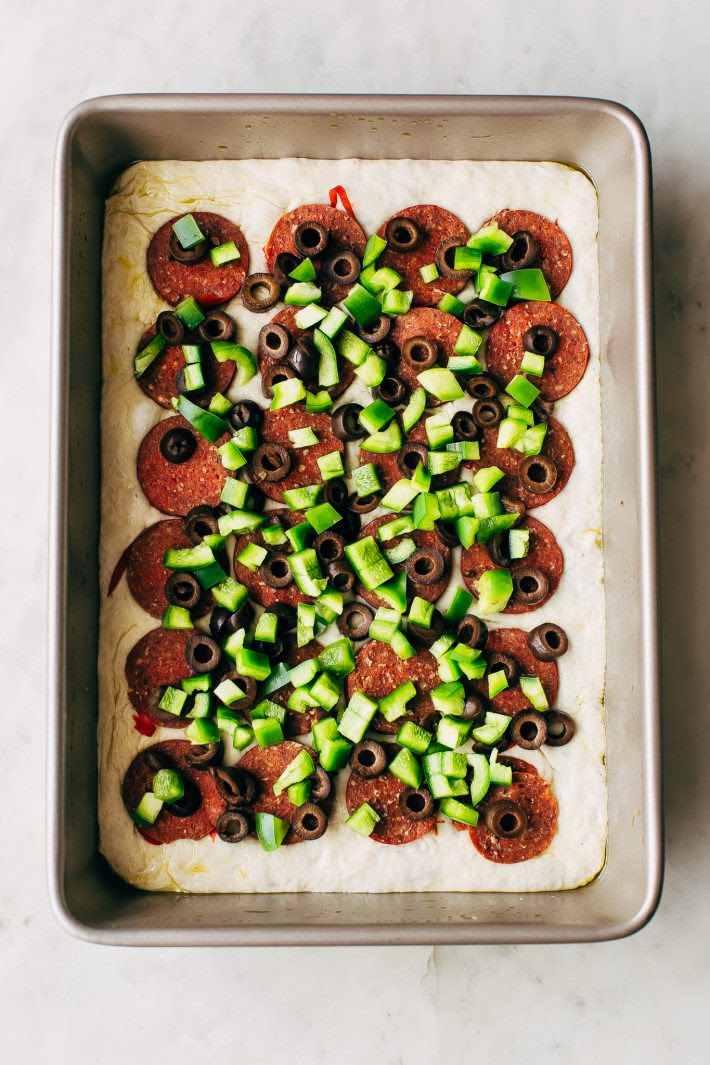 WHAT YOU NEED TO KNOW ABOUT DETROIT-STYLE PIZZA:

All of the magic of a Detroit-style pizza is in the crust. All of it. The crust of a Dtown pizza is thick, and super crispy on the bottom and the pizza itself is usually in a square or rectangular shape because it’s baked in a special pan (more on that in a second.)
Let’s talk about the ingredients you’ll need. For the crust, you’ll need bread flour, water, yeast, and salt. That’s it! 4 ingredients and it may not seem like a lot but what you get is a crust that takes me back to the throwback 90’s Pizza Hut pizza that my childhood was made of.
I know someone is going to ask, well can I just use regular all-purpose flour? The answer is yes, you technically could. It would work. But it won’t yield the results bread flour will. For my food science lovers, the high gluten content in bread flour delivers that supreme, crispy-crunchy outer crust while still keeping that soft and chewy center we all love. Not that you’re asking my advice, but I say it’s worth it to splurge on a sack of bread flour. You’re most definitely going to make this pizza more than once. 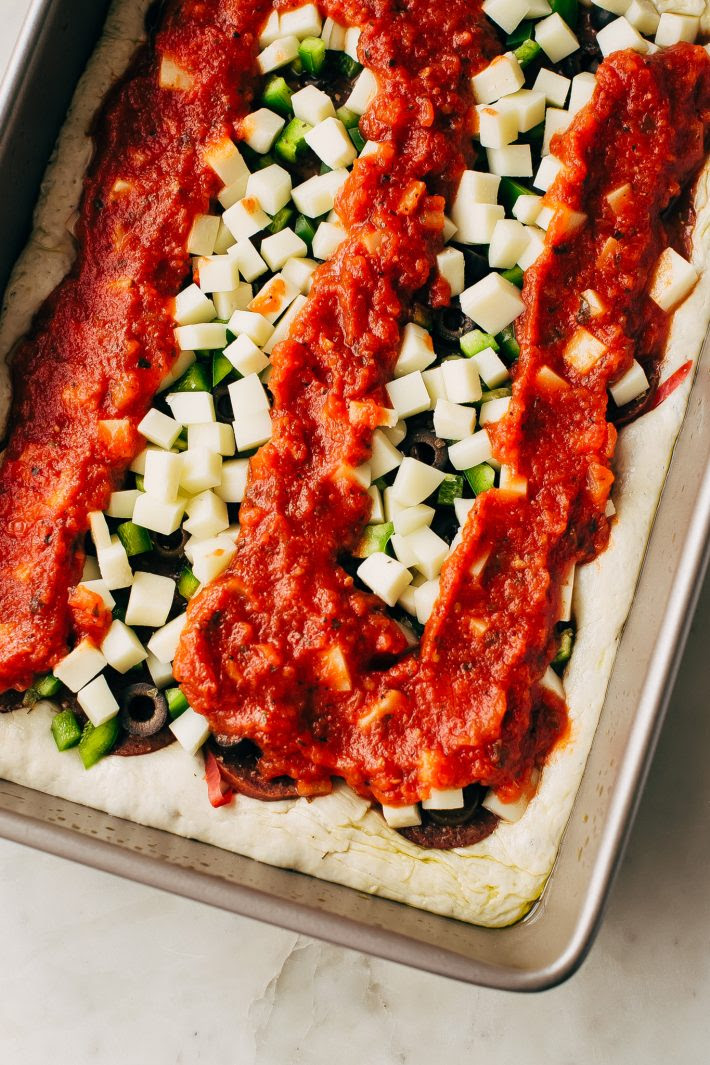 Also, Detroit-style, the toppings go on the bottom. That’s what I’ve been able to gather. There’s a whole lot of back and forth on where the sauce needs to go but for the most part, I hear it goes on the top. When in doubt I default to my Chicago-style ways.
I feel like I need to say this in bold – If you feel otherwise, please place the sauce where you see fit. I’m not telling you how to have your pizza, just giving you a few guidelines here!

But for my first timers, sauce on top is GOOD.
Now that crust. See all that golden crispness? We’ll achieve that by brushing our pan with a little olive oil before we spread out the pizza dough. Speaking of the pan, as mentioned, Detroit-style pizza is usually made in a specific pan (affiliate link.) This kind of pizza dough really reminds me of homemade focaccia. My secret to making the crust even more delicious? Sprinkling some dried oregano on the crust before we top it with the toppings Trust me, it gives the dough that perfect pizza parlor flavor!
For us home cooks, you don’t have to run out and get a special pan (unless you want too!) I used my everyday 9×13 baking pan (affiliate link) that I usually bake these bars in and it worked fine. If you’ve got a pan that’s darker (say dark grey or black) your pizza will crisp and cook slightly faster than lighter pans, so keep a close eye on it!
The first time I made Detroit-style pizza I did it in a dark pan that I bought from $1 at the thrift store (strictly for food photography) and with its super thin sides, the pizza was ready to eat in 10 minutes. So the pan thickness really MATTERS.
Crust close up in …3..2..1 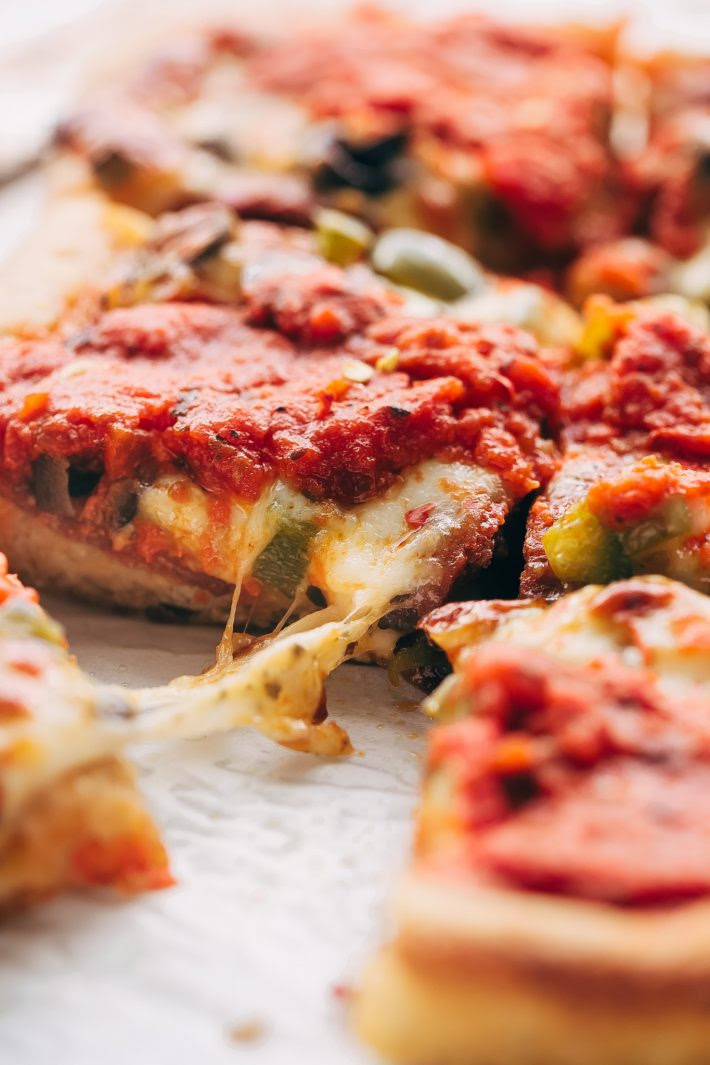 In terms of toppings, you can use just about anything you like! So today’s recipe is more about the crust. I went with pepperoni for my meat loving husband, along with a chopped bell pepper, and some black olives. And this is such a classic combination you just can’t go wrong!
Going light on the sauce here because I didn’t want it dripping off the sides. You’ll need about 1 1/4 cups altogether. You can use my homemade sauce (which I’ll link to in the recipe) or a good quality store-bought sauce. But whatever you do, use good quality mozz here. That’s what makes this so irresistible. I usually just buy a hunk from my cheese department and cube it myself because I almost always have an accident when I’ve tried to shred large quantities. You can also swap some of the mozz for cheddar. My last batch was a 50/50 split and here’s a shocker, it was SOOO GOOD.
Burnt cheesy, crispy bubbly golden brown crust and all the melty, gooey cheese pulls that make our heart sing.
Here’s to a cheesy MONDAY!

prep time:25 MINS (PLUS RESTING)
cook time:15 MINS
total time:3 HOURS 10 MINS
Learn how to make a supreme Detroit-style pizza with simple ingredients! The key to making Detroit-style pizza is all in the crust. Using bread flour yields a crust that’s crispy on the outside and chewy in the center. Top it with pepperoni, black olives, bell peppers and tons of mozzarella cheese! 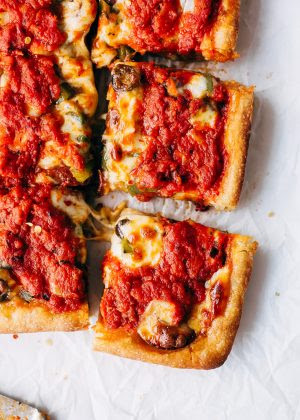 PRINT RECIPE
5
5 / 5 (1 Reviews)
Did you make this recipe? END_OF_DOCUMENT_TOKEN_TO_BE_REPLACED